This page introduces Sysdig policies and the rules that comprise them, providing the conceptual background needed to create, edit, and apply security policies in your own environment.

A Sysdig Secure policy is a combination of rules about activities an enterprise wants to detect in an environment, the actions that should be taken if the policy rule is breached, and– potentially– the notifications that should be sent. A number of policies are delivered out-of-the-box and can be used as-is, duplicated, or edited as needed. You can also create policies from scratch, using either predefined rules or creating custom rules.

Select Policies > Runtime Policies see the default policies you loaded into Sysdig Secure, as well as any custom policies you have created.

From this overview, you can:

See at a Glance

From this panel you can also:

Rules are the fundamental building blocks you will use to compose your security policies. A rule is any type of activity that an enterprise would want to detect in its environment.

Rules can be expressed in two formats:

The Rules Library includes all created rules which can be referenced in policies. Out of the box, it provides a comprehensive runtime security library with container-specific rules (and predefined policies) developed by Sysdig’s threat-research teams, Falco’s open-source community rules, and international security benchmarks such as CIS or MITRE ATT&CK.

In the Rules Library interface, you can see at a glance:

for enhanced traceability and audit.

Default rules appear in the UI as Published By: Sysdig

Rules are categorized by tags, so you can group them by functionality, security standard, target, or whatever schema makes sense for your organization.

Various tags are predefined and can help you organize rules into logical groups when creating or editing policies.

Use the search boxes at the top to search by rule name or by tag.

Falco is an open-source intrusion detection and activity monitoring project. Designed by Sysdig, the project has been donated to the Cloud Native Computing Foundation, where it continues to be developed and enhanced by the community. Sysdig Secure incorporates the Falco Rules Engine as part of its Policy and Compliance modules.

Within the context of Sysdig Secure, most users will interact with Falco primarily through writing or customizing the rules deployed in the policies for their environment.

Falco rules consist of a condition under which an alert should be generated and an output string to send with the alert.

Behind the scenes, the falco_rules.yaml file contains the raw code for all the Falco rules in the environment, including Falco macros and lists.

Anatomy of a Falco Rule

All Falco rules include the following base parameters:

Select a rule from the Rules Library to see or edit its underlying structure. The same structure applies when creating a new Falco rule and adding it to the library.

Falco rules with the source k8s_audit need Kubernetes Audit logging enabled for conditions to be met.

Many of the Falco rules in the Rules Library contain Falco macros in their condition code.

You can browse the Falco Macros list, examine a macro’s underlying code, or create your own macro. The default Falco rule set defines a number of macros that make it easier to start writing rules. These macros provide shortcuts for a number of common scenarios and can be used in any user-defined rule sets. 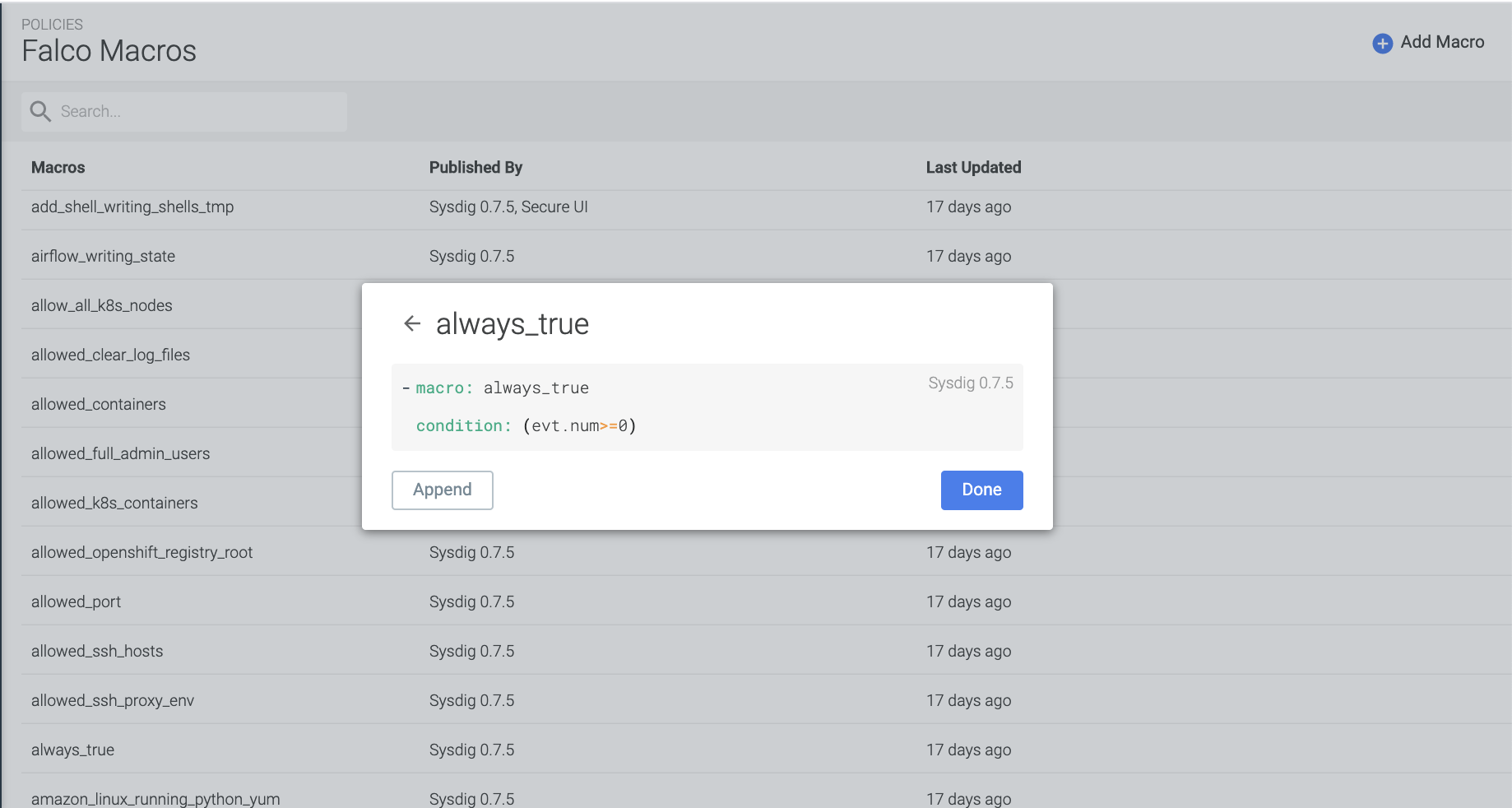 Default Falco lists are added to improve the user experience around writing custom rules for the environment.

For example, the list allow.inbound.source.domains can be customized and easily referenced within any rule.

(On-Prem Only) Upgrading Falco Rules with the Rules Installer

For the Docker pull command and instructions for the Rules Installer, see Install Falco Rules On-Premises.

Unlike Falco rules, the list-matching rule types do not permit complex rule combinations, such as “If a connection on x port from y IP address is detected…”

The five list-matching Rule Types are described below.

These rules are used to notify if a specific image name is running in an environment. The rule is evaluated when the container is started. The items in the list are image pattern names, which have the syntax <host.name>:<port>/<name>/<name2>:<tag>@<digest>.

Only <name2> is required; everything else is optional and inferred building on the name.

These rules are used to notify if there is write activity to a specific directory/file. The rule is evaluated when a file is opened. The items in the list are path prefixes.

These rules are used to:

Note that the current Sysdig UI talks about “Allowing” or “Denying” connections with network rules, but this can introduce some confusion.

For both Inbound and Outbound connections:

You would still need to add the rule to a policy and attach actions to respond to a connection attempt by stopping/pausing/killing the container where the connection occurred. See also: Understanding How Policy Actions Are Triggered.

These rules are used to detect if a specific process, such as SSH, is running in a particular area of the environment.

The rule is evaluated when a process is launched. The items in the list are process names, subject to the 16-character limit enforced by the Linux kernel. (See also: Process Name Length information.)

The syscall rule type is almost never deployed in user-created policies; the definitions below are for information only.

These rules are used (internally) to:

The rule is evaluated on syscalls that create inbound (accept, recvfrom, recvmsg, listen) and/or outbound (connect, sendto, sendmsg) connections. The items in the list are port numbers.

A Container Image consists of the following components:

Each item in the containers list is first broken into the above components, using the following rules:

Once the item has been broken into components, they are considered a prefix match against candidate image names.

docker.io:1234/sysdig/agent:1.0: must match the registry host, port, image, and tag, with any digest

docker.io:1234/sysdig/agent: must match the registry host, port, and image, with any tag or digest

sysdig/agent: must match the image, with any tag or digest. Would not match an image docker.io:1234/sysdig/agent, as the image provides additional information not in the match expression.

docker.io:1234/: matches all images for that registry host and port

docker.io/: matches all images for that registry host

There are a variety of optional tools to help automate the creation of policies. See also: