To track kubectl exec and other Kubernetes commands, you must enable Kubernetes audit logging.

If you are running on a GKE cluster, review the GKE Limitations.

Activity Audit takes the high-value data from captures and makes it always-on, searchable, and indexed against your cloud-native assets. This stream includes executed commands, network activity, file activity, and kube exec requests to the Kubernetes API. 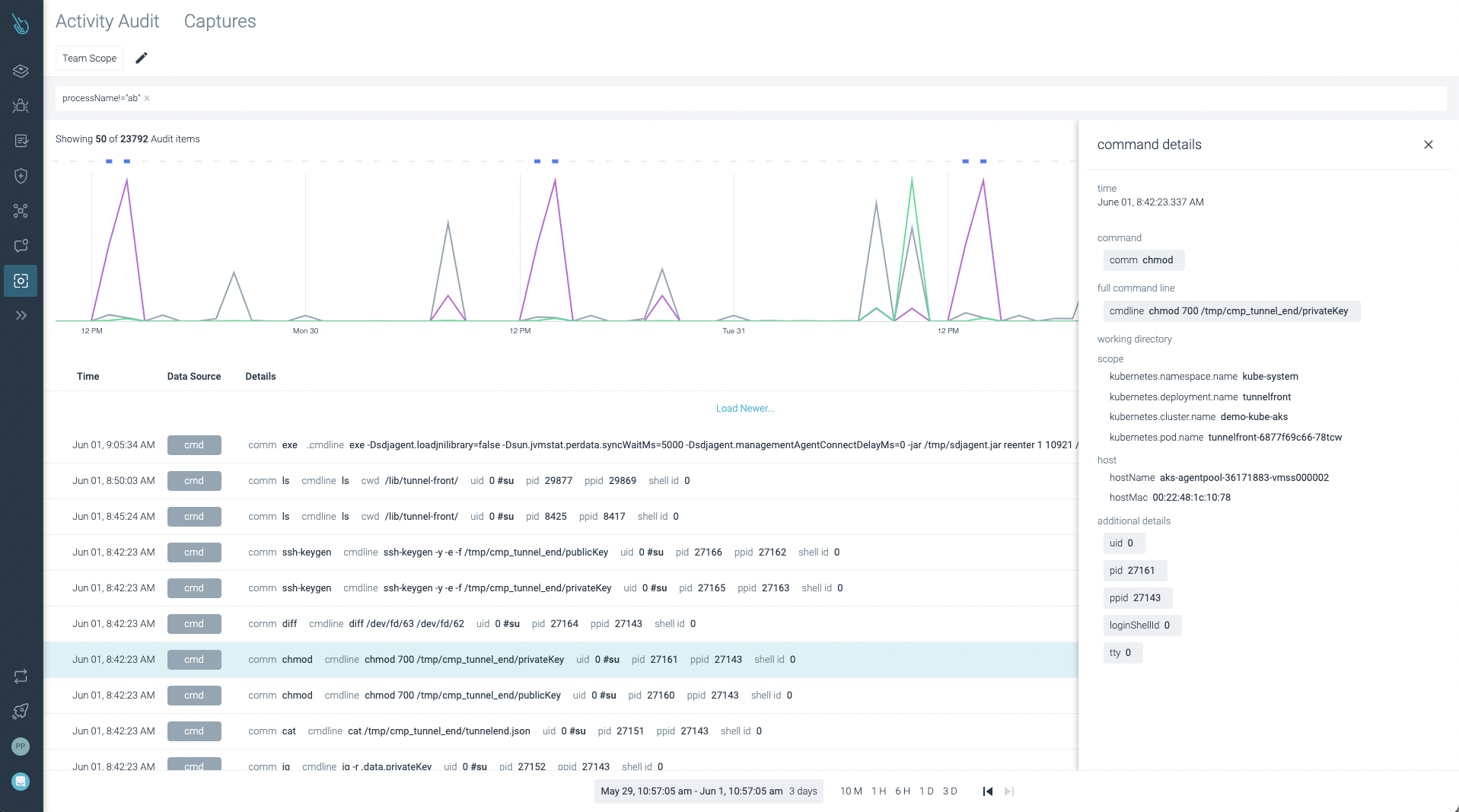 Understanding How Activity Audit is Used

A system investigation may be triggered by an event generated by Sysdig, or by an alert from another tool or person.

Activity Audit is a critical requisite for many compliance standards:

Activity Audit displays a continuously updated list of activities. Use the UI features to find and filter the information you need. 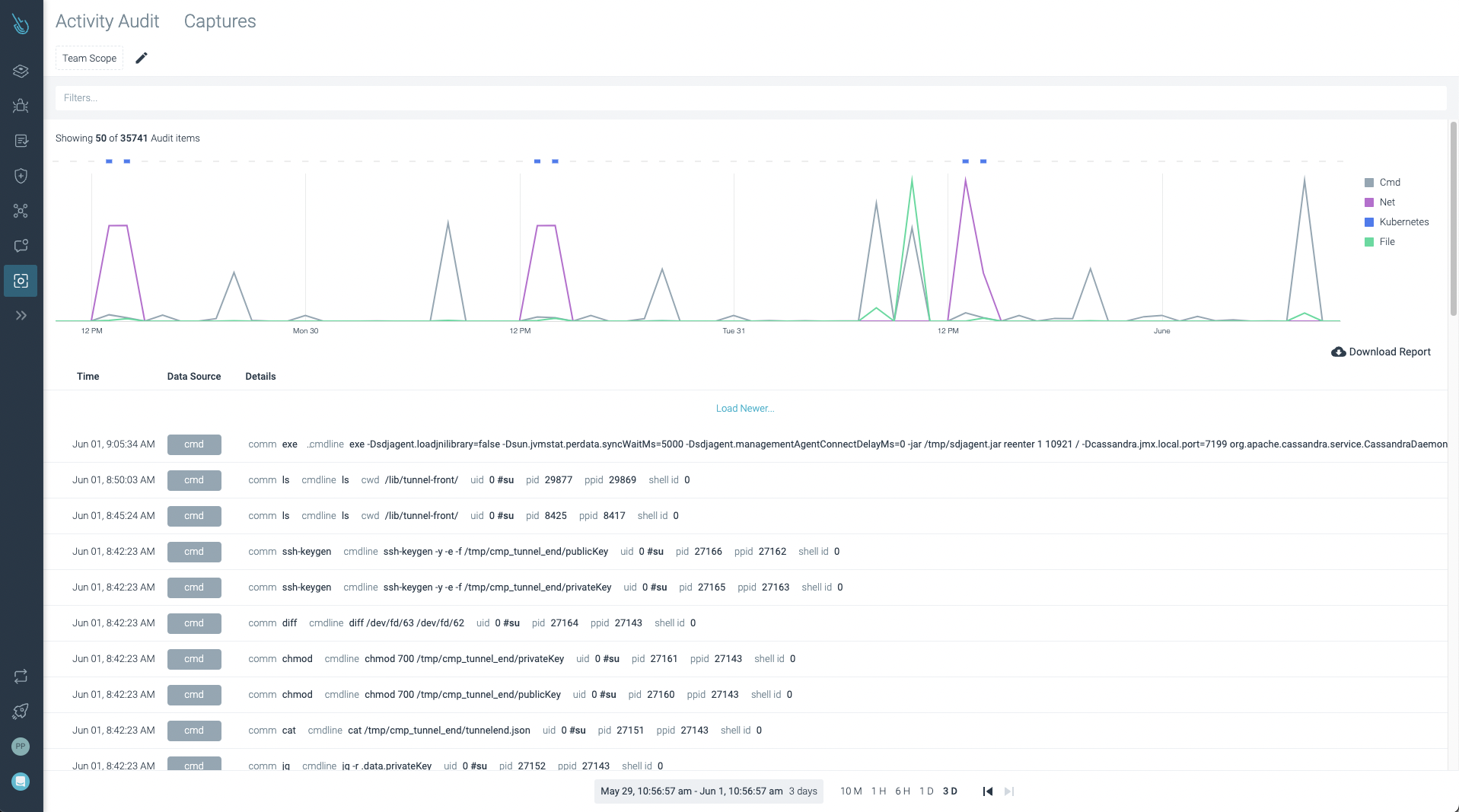 Filtering is the heart of Activity Audit’s power. Filters allow you to search, sort, parse, and surface meaningful data and connections as they are needed.

The graph shows the activity frequency for each data source, allowing users easily to zero-in on anomalies.

Drag the mouse over the peak to auto-zoom on the time frame and see more detail.

Use the legend at the right side of the graph to filter information from one particular data set. The currently available data sources are:

Activity audit feature captures only interactive commands and the network connections and file modifications related to those commands. Kube exec commands, on the other hand, are extracted from the Kubernetes/OpenShift audit log.

Use the time window navigation bar to show only activities run within that window.

Select an activity row to see its details on the right panel, including all the collected attributes. See Review Activity Details for the attributes of each data source. Some attributes allow you to quickly add filters including = or excluding != such a value. 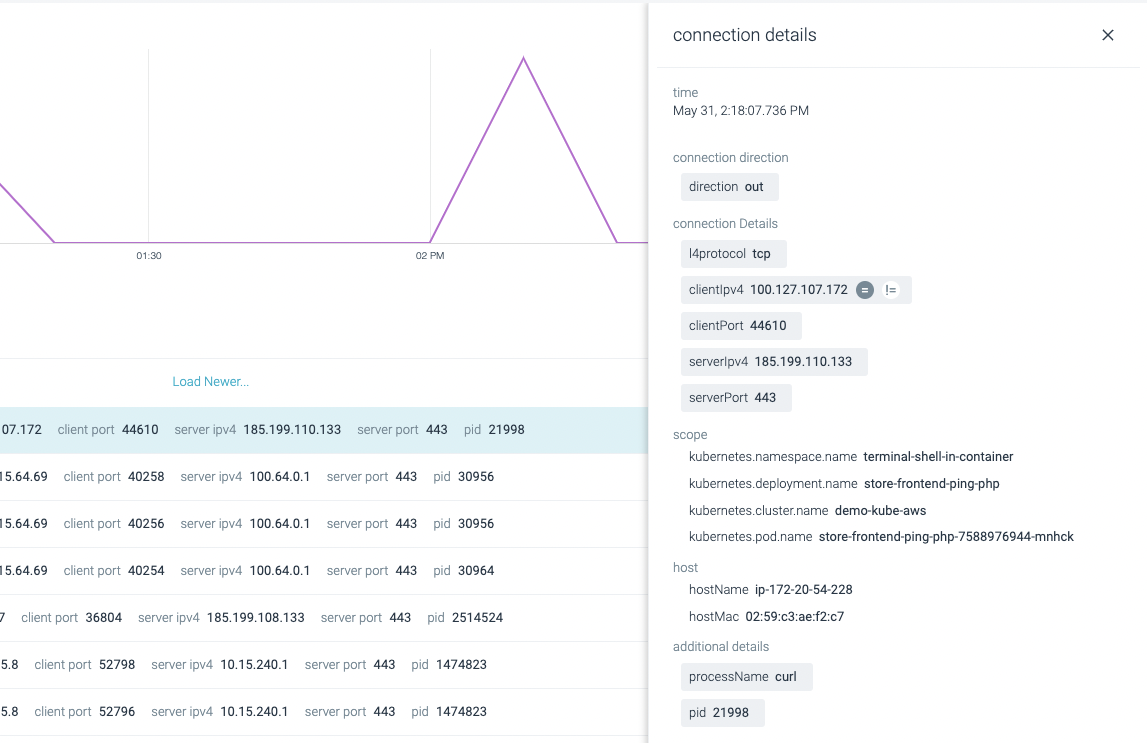 You can also perform quick filtering by selecting attribute and filter type directly from the activity row.

Beside each activity originating a trace there is a Trace button

. Such a button is available only for the following events:

This feature allows you to correlate activities from the originator to each single performed operation. See Follow a kubectl exec Trace use case to see it in action.

This button does not appear if you are running on a GKE cluster.

The Kubernetes event in the activity audit list labeled kube run is received from the AC in the following cases:

Only TCP or UDP connections are currently captured in activity audit.

During an investigation you usually need to find suspicious activities among the most normal and recurring ones.

In this example, we have a ps command being executed very frequently, being noisy and making investigations harder.

In order facilitate focusing on other, more suspicious commands, filters can be used to reduce noise and make the investigation easier. 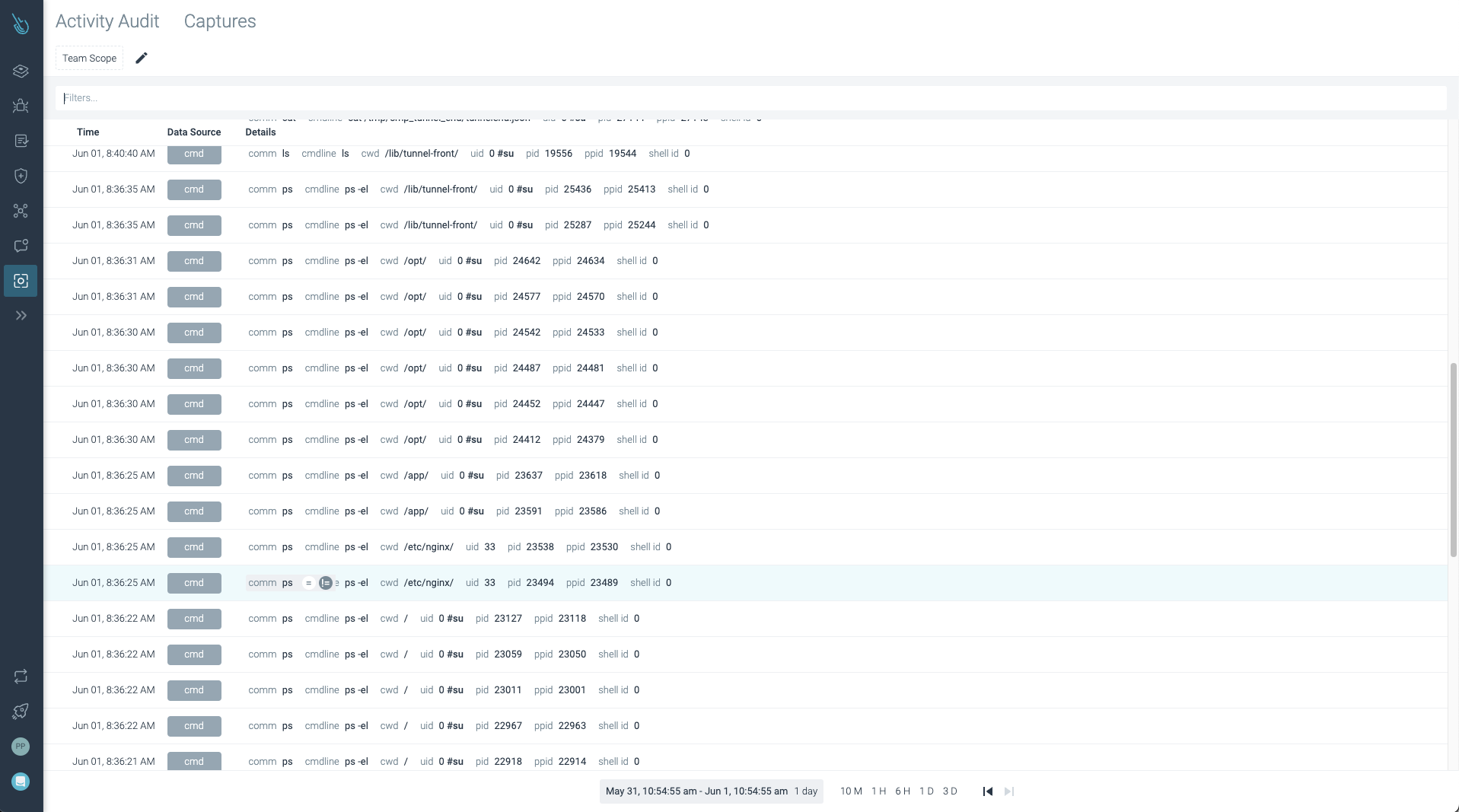 In this case, quick filters can be used to exclude the ps command, so that other more interesting commands emerge instantly. 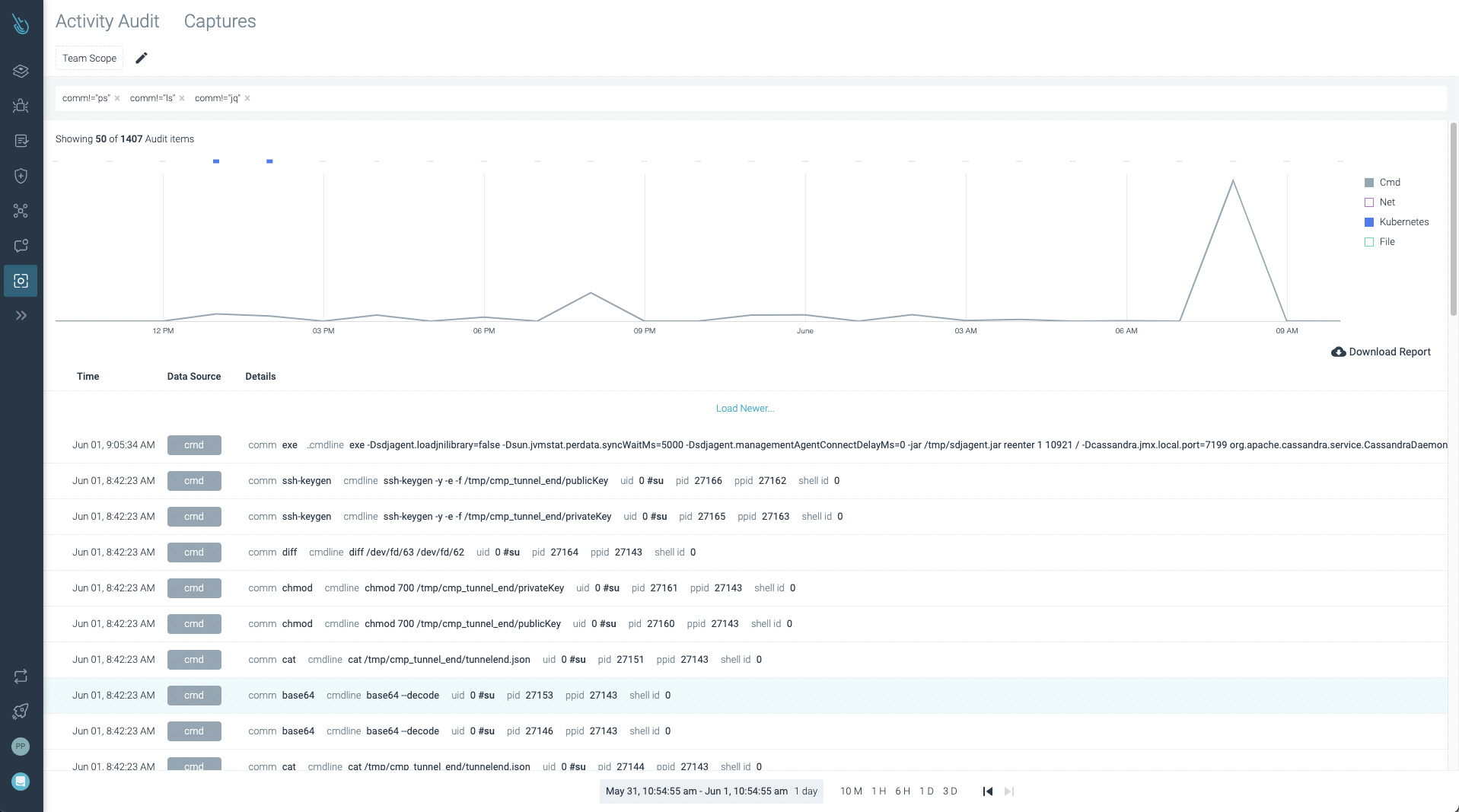 A Policy Event reports a dangerous peak in network connections coming from a specific pod. This example describes one way to search for the root cause.

What user and what activity triggered this issue?

In a production environment, kubectl exec commands are typically suspicious. Also, because such commands are interactive sessions, it can be difficult to pinpoint which individual has issued the command(s) and what other activities the individual performed. This is where Sysdig’s Trace functionality comes in, correlating kubectl exec commands with a specific user and the network and command activities performed in that user’s session.

In this example, suspicious activity has been detected and you want to determine whether someone has downloaded and executed a Trojan horse.

This button does not appear if you are running on a GKE cluster.