Sysdig Monitor allows you to adjust the aggregation settings when graphing or creating alerts for a metric, informing how Sysdig rolls up the available data samples in order to create the chart or evaluate the alert. This topic helps you familiarize with aggregation concepts and settings and explains some mechanic Sysdig uses to allow for efficient query performance and data retention.

Sysdig agents collect 1-second samples and report data at 10-seconds resolution. It is the lowest resolution at which backend stores the data. In order to do so, the agent performs the downsampling from 1-second to 10-second samples.

Note: This is true for all the metrics, except Prometheus. For Prometheus metrics, data is sampled at every 1 second, but what is reported in the 10-seconds interval is the lastest value, not the downsample.

Downsampling refers to the process of aggregating multiple samples, on defined time interval, into set of values which can provide estimation for aggregated time ranges. In Sysdig parlance, downsampling is nothing but the data aggregation performed by the backend before exposing it as time aggregation on the UI or by the API. In effect, the data available for time aggregation during query evaluation is not the raw data, but the values that represent the estimated values for the given time range.

Downsampled data is used only for longer time ranges. If you are viewing most recent data, such as 10 minute or last 1 hour, raw data is used for evaluation.

For example, the data collected every 10-seconds is aggregated and rolled up in blocks of 1-minute interval. From the recorded values in 1-minute rollups, data is rolled up again for a block of 10-minutes interval.

Data resolution is the frequency with which the data is displayed. Sysdig Monitor supports the data resolution of 10 seconds, 1 minute, 10 minutes, 1 hour, and 1 day.

Time aggregation comes into effect in two situations (that can sometimes overlap):

Difference Between Rate and average

Time Aggregation on the UI

On the Sysdig Monitor UI, you select the time aggregation from the Metric drop-down.

Depending on the time range you have selected, how old the data is, and what the resolution is , panels display data at a granularity of 10 seconds, 1 minute, 10 minute, 1 hour, and 1 day.

When a panel displays an amount of time greater than 5 minutes, data points are drawn as an aggregate for an appropriate time interval. For example, for a panel covering 1 hour, each data point would reflect a 1-minute interval.

At time intervals of 1-minute and above, charts can be configured to display different aggregates for the 10-second metrics used to calculate each datapoint.

Time Aggregation and Time Range Mapping on the UI

Metrics applied to a group of items (for example, several containers, hosts, or nodes) are averaged between the members of the group by default. For example, three hosts report different CPU usage for one sample interval. The three values will be averaged, and reported on the chart as a single datapoint for that metric.

There are several different types of group aggregation:

If a chart or alert is segmented, the group aggregation settings will be utilized for both aggregations across the whole group, and aggregation within each individual segmentation.

For example, the image below shows a chart for CPU% across the infrastructure:

When segmented by proc_name, the chart shows one CPU% line for each process:

Each line provides the average value for every process with the same name. To see the difference, change the group aggregation type to sum:

The metric aggregation value showed beside the metric name is for the time aggregation. While the screenshot shows AVG, the group aggregation is set to SUM. 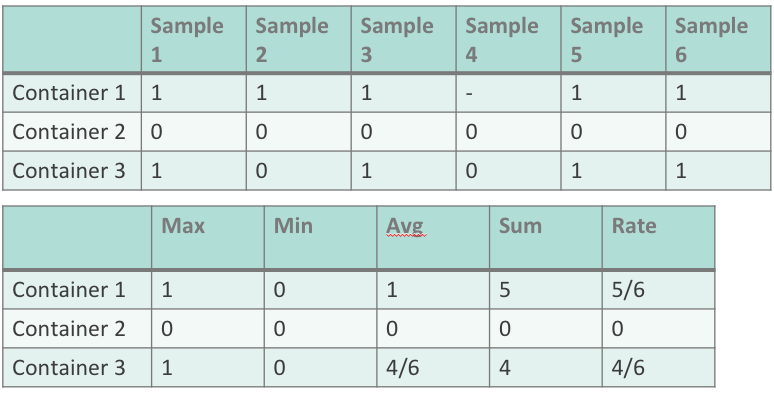 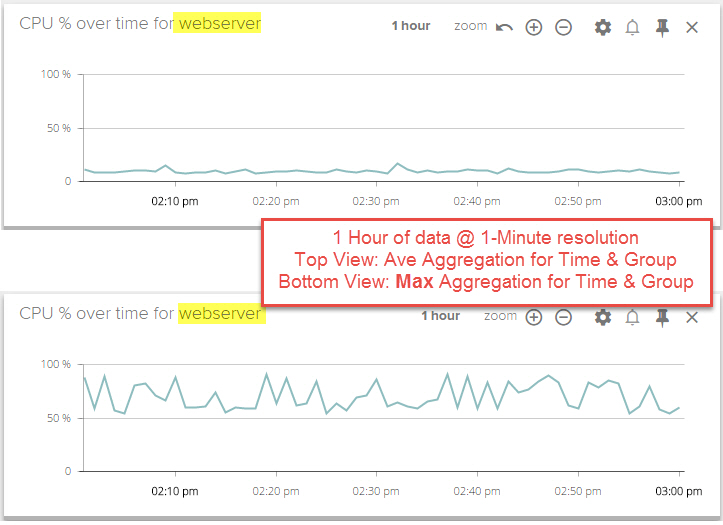 For each one minute interval, the second chart renders the highest CPU usage value found from the servers in the webserver group and from all of the samples reported during the one minute interval. This view can be useful when searching for transient spikes in metrics over long periods of time, that would otherwise be missed with average aggregation.

The group aggregation type is dependent on the segmentation. For a view showing metrics for a group of items, the current group aggregation setting will revert to the default setting, if the Segment By selection is changed.