StatsD is an open-source project built by Etsy. Using a StatsD library specific to your application’s language, it allows for the easy generation and transmission of custom application metrics to a collection server.

The Sysdig agent contains an embedded StatsD server, so your custom metrics can now be sent to our collector and be relayed to the Sysdig Monitor backend for aggregation. Your application metrics and the rich set of metrics collected by our agent already can all be visualized in the same simple and intuitive graphical interface. Configuring alert notifications is also exactly the same.

The Statsd server, embedded in Sysdig agent beginning with version 0.1.136, is pre-configured and starts by default so no additional user configuration is necessary. Install the agent in a supported distribution directly or install the Docker containerized version in your container server and you’re done.

By default, the Sysdig agent’s embedded StatsD collector listens on the standard StatsD port, 8125, both on TCP and UDP. StatsD is a text based protocol, where samples are separated by a \n .

Sending metrics from your application to the collector is as simple as:

The example transmits the counter metric "hello_statsd" with a value of ‘1’ to the Statsd collector listening on UDP port 8125. Here is a second example sending the output of a more complex shell command giving the number of established network connections:

The protocol format is as follows:

Metric names can be any string except reserved characters: |#:@ . Value is a number and depends on the metric type. Type can be any of: c, ms, g, s . Sampling ratio is a value between 0 (exclusive) and 1 and it’s used to handle subsampling. When sent, metrics will be available in the same display menu for the subviews as the built in metrics.

In infrastructures already containing a third party StatsD collection server, StatsD metrics can be collected “out of band”. A passive collection technique is automatically performed by our agent by intercepting system calls - as is done for all the Sysdig Monitor metrics normally collected. This method does not require changing your current StatsD configuration and is an excellent way to ’test drive’ the Sysdig Monitor application without having to perform any modifications other than agent installation.

The passive mode of collection is especially suitable for containerized environments where simplicity and efficiency are essential. With the containerized version of the Sysdig Monitor agent running on the host, all other container applications can continue to transmit to any currently implemented collector. In the case where no collector exists, container applications can simply be configured to send StatsD metrics to the localhost interface (127.0.0.1) as demonstrated above - no actual StatsD server needs to be listening at that address.

Effectively, each network transmission made from inside the application container, including statsd messages sent to a non existent destination, generates a system call. The Sysdig agent captures these system calls from its own container, where the statsd collector is listening. In practice, the Sysdig agent acts as a transparent proxy between the application and the StatsD collector, even if they are in different containers. The agent correlates which container a system call is coming from, and uses that information to transparently label the StatsD messages. 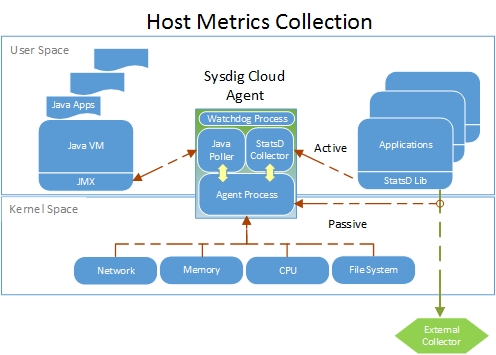 The above graphic demonstrates the components of the Sysdig agent and where metrics are actively or passively collected. Regardless of the method of collection, the number of StatsD metrics the agent can transmit is limited by your payment plan.

Note 1: When using the passive technique, ICMP port unreachable events may be generated on the host network.

Note 2: Some clients may use IPv6 addressing (::1) for the “localhost” address string. Metrics collection over IPv6 is not supported at this time. If your StatsD metrics are not visible in the Sysdig Monitor interface, please use “127.0.0.1” instead of “localhost” string to force IPv4. Another solution that may be required is adding the JVM option: java.net.preferIPv4Stack=true.

Note 3: When StatsD metrics are not continuously transmitted by your application (once per second as in the case of all agent created metrics), the charts will render a ‘zero’ or null value. Any alert conditions will only look at those Statsd values actually transmitted and ignore the nulls.

A counter metric is updated with the value sent by the application, sent to the Sysdig Monitor backend, and then reset to zero. You can use it to count, for example, how many calls have been made to an API:

You can specify negative values to decrement a counter.

A gauge is a single value that will be sent as is:

These are plotted as received, in the sense, they are at a point in time metrics. You can achieve relative increments or decrements on a counter by prepending the value with a + or a - respectively. As an example, these three samples will cause table_size to be 950:

In Sysdig Monitor, the gauge value is only rendered on the various charts when it is actually transmitted by your application. When not transmitted, a null is plotted on the charts which is not used in any calculations or alerts.

A set is like a counter, but it counts unique elements. For example:

Will cause the value of active_users to be 2.

Timer StatsD metrics types are not supported by default, but you can push them into sysdig by setting up prometheus/statsd_exporter as given in statsd exporter.

Labels are an extension of the StatsD specification offered by Sysdig Monitor to offer better flexibility in the way metrics are grouped, filtered and visualized. Labeling can be achieved by using the following syntax:

In general, this is the syntax you can use for labeling:

Label names prefixed with ‘agent.label’ are reserved for Sysdig agent use only and any custom labels starting with that prefix will be ignored.

The number of StatsD metrics the agent can transmit is limited to 1000 for the host and 1000 for all running containers combined. If more metrics are needed please contact your sales representative with your use case.

The Sysdig agent can reliably receive StatsD metrics from containers, even while the agent is under load. This setting is controlled by the use_forwarder configuration parameter.

With the introduction of the togglable use_forwarder option, the agent can collect StastsD metrics even under high load.

This feature is introduced in Sysdig agent v0.90.1. As of agent v10.4.0, the configuration is enabled by default.

To disable, set it to false:

When enabled, rather than use the system call stream for container StatsD messages, the agent listens for UDP datagrams on the configured StatsD port on the localhost within the container’s network namespace. This enables the agent to reliably receive StatsD metrics from containers, even while the agent is under load.

This option introduces a behavior change in the agent, both in the destination address and in port settings.

Using the forwarder is not a valid use case when a StatsD server is running in the container that you are monitoring.

A StatsD server running in a container will already have a process bound to port 8125 or a configured StatsD port, so you can’t use that port to collect the metrics with the forwarder. A 10-second startup delay exists in the detection logic to allow any custom StatsD process to bind to that particular port before the forwarder. This ensures that the forwarder does not interrupt the operation.

Therefore, for this particular use case, you will need to use the traditional method. Disable the forwarder and capture the metrics via the system call stream.

Every StatsD compliant client works with our implementation. Here is a quick list, it’s provided just as reference. We don’t support them, we support only the protocol specification compliance.

A full list can be found at the StatsD GitHub page.

To disable Sysdig agent’s embedded StatsD server, append the following lines to the /opt/draios/etc/dragent.yaml configuration file in each installed host:

After modifying the configuration file, you will need to restart the agent with:

To modify the port that the agent’s embedded StatsD server listens on, append the following lines to the /opt/draios/etc/dragent.yaml configuration file in each installed host (replace #### with your port):

Use standard ASCII characters, we suggest also to use . namespaces as we do for all our metrics.