This the multi-page printable view of this section. Click here to print.

Return to the regular view of this page.

This page describes the concepts behind Sysdig’s users, teams, and role permissions.

Users in Sysdig are identified by user name, email address, and password or third-party authentication option.

When invited, the new user is created in the Sysdig database upon the user’s first successful login to the Sysdig UI. Before the user accepts the invitation, enters a password, and logs in, they have a “pending” status.

From the outset, users in the Sysdig environment have one of three types of system privileges

When a user is created, it is automatically assigned to a default team (described below).

Teams can be thought of as service-based access control. Teams are created and assigned separately in Sysdig Monitor and Sysdig Secure.

Organizing users into teams enables enforcing data-access security policies while improving users' workflows. There are different team roles, each of which has read/write access to different aspects of the app.

This limits the exposure of data to those who actually need it, and also makes users more productive by focusing them on data that is relevant to them. 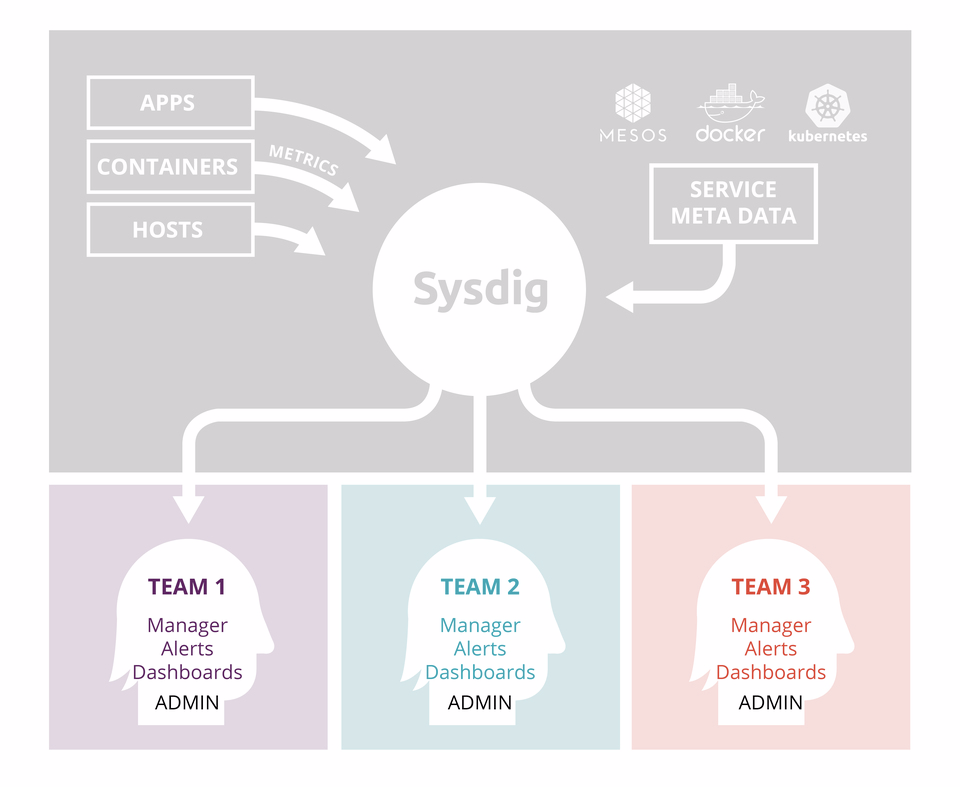 The following are some potential use cases for Teams.

Out of the box, the Sysdig Platform has one immutable team for each product. Depending on licensing, an organization may use one or both:

Administrators create additional teams and can designate any team to become the default team for that product. The number of teams allowed in an environment is determined by licensing.

If the Essentials tier is licensed, only the default teams and roles are enabled. See Subscription for more details.

If upgrading from Essentials to Enterprise, Capture functionality will become available. Users must go to Settings>Teams><Your Team> and check the Enable Captures box. They must then log out and log in again.

Users can be assigned roles that expand or limit their basic system privileges on a per-team basis.

How Team Membership Affects Users' Experience of the UI

At the highest level, the dashboards, alerts, and policy events you see are limited by the settings of the team you are switched to.

Switching Teams in the UI

In general, administrators should:

Note: When a user logs in to a team for first time, they will see a wizard introducing dashboards, alerts, etc. specific to that team.

By default, new users (added manually or through a third-party authenticator) are assigned Advanced User rights. If a administrator wants to limit new users' rights further, there are several ways to do so.

Integrating Users and Teams via API

If you are working with Sysdig Support Engineers to provision users and teams via the Sysdig API, note how the user and team role names within the UI map to the API ROLE names.

This page describes how to add, delete, and configure user information from within the Sysdig Monitor or Sysdig Secure UI.

The new user will be added to the User Management table. Their status will be listed as Pending until the invitation is accepted.

Admin privileges cannot be assigned until the invitation has been accepted, and the user has logged into the interface for the first time. They can, however, be added to additional teams or have team-based roles assigned. For more information on configuring teams roles, refer to the Manage Teams and Roles documentation.

To edit an existing user:

To delete an existing user:

Deleting a user cannot be undone. Any dashboards or explore groupings that the user created for any team will be permanently deleted.

The use of teams provides a strategic way to organize groups, streamline workflows, or protect data, as needed by an organization. Administrators who design and implement teams should have in-depth knowledge of organizational infrastructure and goals.

Only Advanced users can configure team permissions. Teams and roles must be assigned separately in Sysdig Monitor and Sysdig Secure.

For more information on each configuration option, refer to Table 1: Team Settings.

Ensure that the team names are unique in both Monitor and Secure products. For example, if you attempt at creating a team in Secure with the same name as one created in Monitor, you will see an error message stating that a team with the same name already exists and you will be prevented from creating the team.

Configure an Entry Page or Dashboard for a Team

Some Sysdig Monitor teams benefit from using a default entry point other than the usual Explore page, as users who don’t need in-depth monitoring information can onboard and navigate Sysdig Monitor more efficiently.

Use the Default Entry Point setting on the Team page, as shown in Create a Team.

Note: If selecting a dashboard, open the secondary Dashboard drop-down menu, or type the name of the dashboard to select it.

(The dropdown is only populated with shared dashboards accessible by anyone on the team.)

Users can be assigned to multiple teams. Team assignment is made from the Team page (not the User page), and must be done by an Administrator or Team Manager.

Assign a User to a Team

Review Team-Based Roles and Privileges for an overview.

Note that the Advanced User permission can be further refined into either a View-only user or a Team Manager.

Managers can add or delete members from a team, or toggle members' rights between Edit, Read, or Manager.

Note that Admins have universal rights and are not designated as Team Managers, Advanced Users, View-Only users, or Standard users.

Manager or Advanced User permissions can be assigned even to Pending users; administrators do not have to wait for the user’s first login to set these roles.

To assign a role to a user on a team:

To configure an existing team:

When a team is deleted, some users may become “orphans”, as they are no longer a part of any team. These users will be moved to the default team.

To delete a created team: