Sysdig Monitor allows you to consume and store custom metrics through a flexible and cost-effective Time Series Billing model aligned with your usage. With an enhanced billing experience, you can view your time-series consumption at a glance, analyze trends, and change subscription plans if need be.

Use the Sysdig Subscription page to view your account licensing, usage, and spending. Based on your current subscription tier, time-series usage, and the number of active agents, you can estimate your Sysdig time series consumption costs and take further actions. Time Series Billing works only in SaaS environments and is not currently available in on-prem environments.

See Use Cases for more details.

Sysdig meters the following types of custom metrics ingested by the Sysdig agent:

In addition, all metrics and metadata ingested via Prometheus Remote Write and cloud platform metrics are metered against custom time series.

Metrics which do not fall into one of the above categories, such Kube State Metrics (KSM) and container metrics, are not considered custom metrics and thus not counted against custom time series entitlements.

Custom time series consumption is calculated against the reserved time series included as an entitlement with your subscription. The basic Sysdig Monitor plan includes a 2,000 time series entitlement per agent per hour. You can purchase more by adding on-demand agents or time series packs.

Time series consumed beyond your subscription entitlement is aggregated across all agents running in your environment. For example, if you have two agents running, you can consume 3,000 metrics on one agent and 1,000 on another, for a total of 4,000 TS, without incurring additional charges (based on the default entitlement of 2,000 TS per agent).

Let’s assume that your Sysdig Monitor subscription includes 15 total Sysdig reserved agents. Each one of those agents is entitled to 2,000 custom time series per hour. To determine the total maximum time series for an account, multiply the number of agents by the time series entitlement per agent – 15 * 2,000 = 30,000 – which means that the account is entitled to consume 30,000 custom time series per hour aggregated across all agents. Any one agent can consume greater than the 2,000 entitlement as long as the maximum for all agents does not exceed the account entitlements (in this example, 30,000).

Using the above example, if you purchase ten time series packs consisting of 1,000 time series per pack, you will increase the default time series in your account from 30,000 to 40,000. This will entitle you to consume 10,000 more metrics across all of the Sysdig agents. 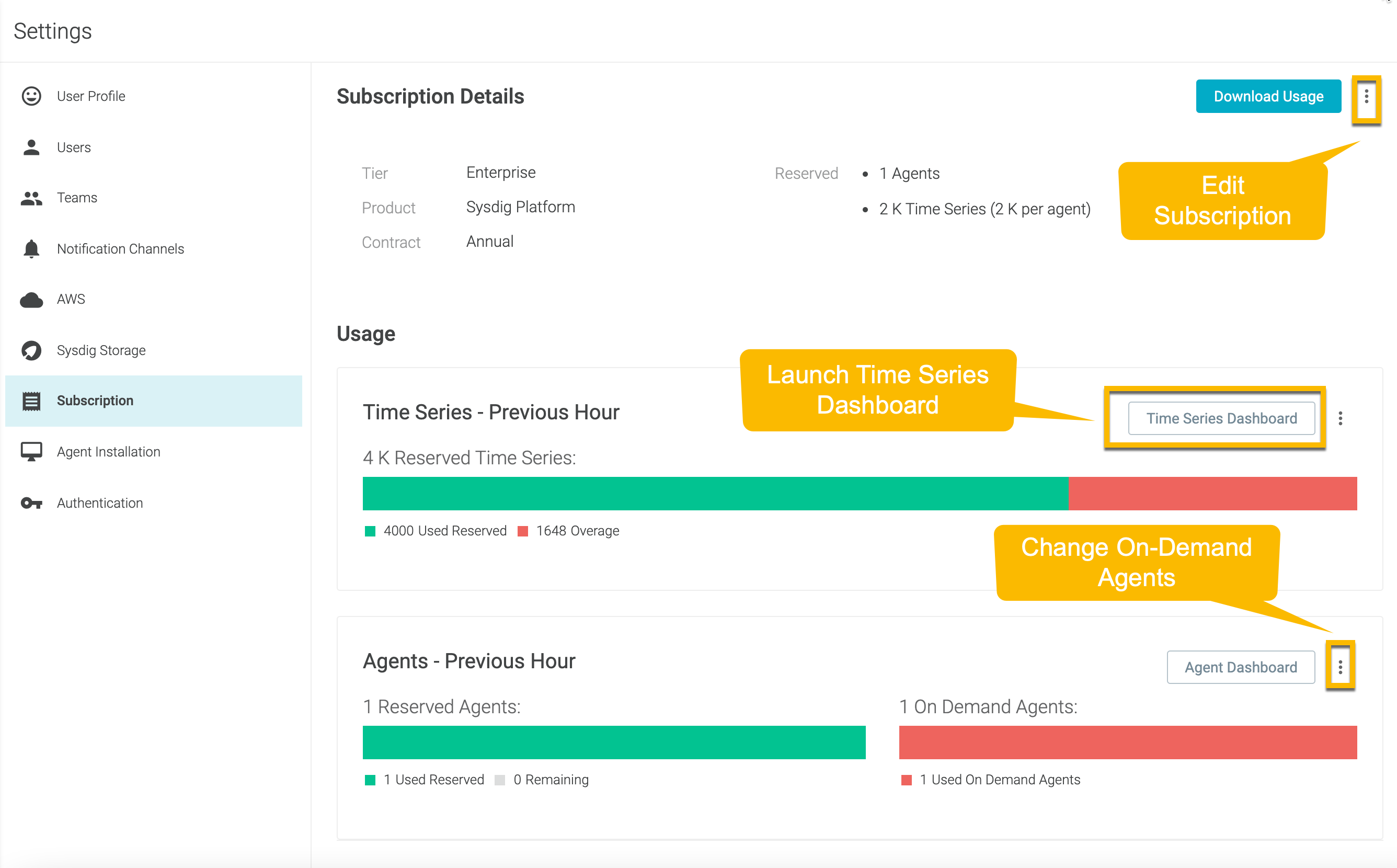 The Subscription Plan page gives you the directions to change the subscription plan.

To help you identify the usage trends that are important to you, Sysdig provides the following metrics via the Time Series Dashboard: 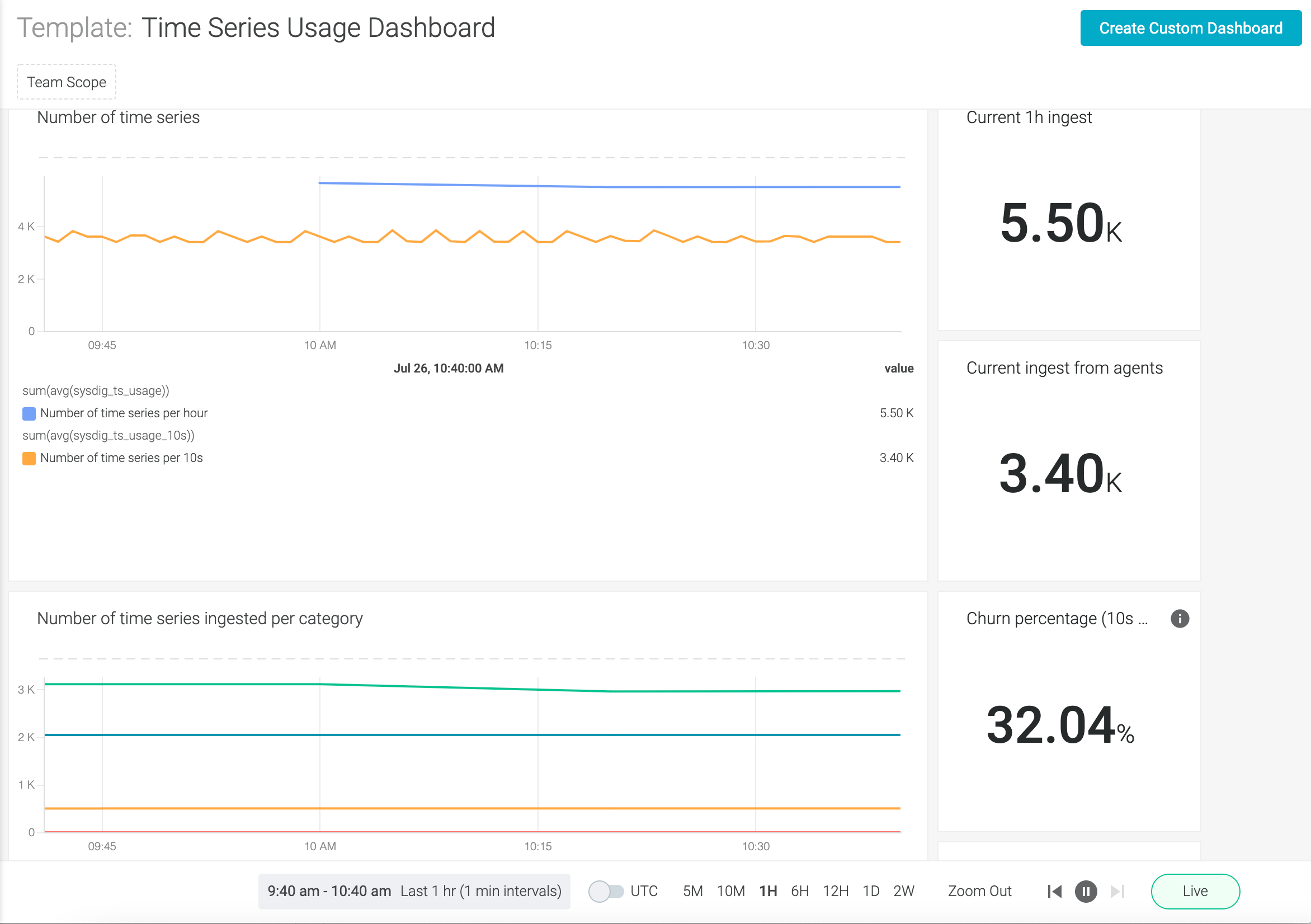 On the Subscription page, under Usage, click Time Series Dashboard. You can view the following:

An hour period is considered in order to take the churn into account. Sysdig uses the sysdig_ts_usage_10s metric to calculate the spikes caused by churns and provides you the churn percentage in the dashboard.

When a time series stops receiving new data points, it becomes inactive. This event is called time series churn. It occurs more often during an upgrade in a Kubernetes cluster or when containers are replaced by new ones. Restarts, redeploys, dynamic workloads also cause churn and generate additional time series.

The churn rate is the number of time series that churn over time. Sysdig uses the sysdig_ts_usage_10s metric to analyze these scenarios.

The Time Series Usage Dashboard provides a ratio of time series detected at 1-hour period and 10-seconds period. This ratio is known as the churn percentage and it is expressed as this PromQL query:

Time series collected by Prometheus Remote Write are excluded from this ratio because they are not collected by the Sysdig agent.

Time series billing is calculated per month. A basic subscription will provide you 2,000 time series per agent. This entitlement is applicable only to custom metrics, while you can continue consuming Sysdig and KSM metrics without incurring additional costs. Time series consumed beyond your subscription limit will be charged and is aggregated across all agents running in your environment.

For example, if you have three agents running in your environment with the following consumption details:

For more information on controlling metric usage, see the following:

Let’s say you have a Sysdig Monitor account which primarily consumes metrics from downstream Prometheus servers via Prometheus Remote Write. As such, you have only licensed the account for one Sysdig Agent, which entitles your account to 2,000 time series.

The time series billing for the month is calculated as follows:

Extending the above example, we can see how purchasing individual time series packs will extend your time series entitlement.

The billing for the month is calculated as follows:

If the pre-purchase price for time series packs is $5 ($2.50 less per 1,000 time series than the on-demand usage price), and you’ve purchased 100 packs, that brings your pre-purchase time series entitlement cost to $500 per month.